AMA had been a positive influence on young men for over 100 years.  Many went on to be successful in their personal and business lives.  Recognizing that influence, and acknowledging the need for ﬁnancial and human resource assistance to maintain the AMA Museum as a ﬁrst class institution, Helen Charleton established an internship in memory of her dear late husband, William Curtis Charleton, AMA Class of 1915. He passed away ln 1988. 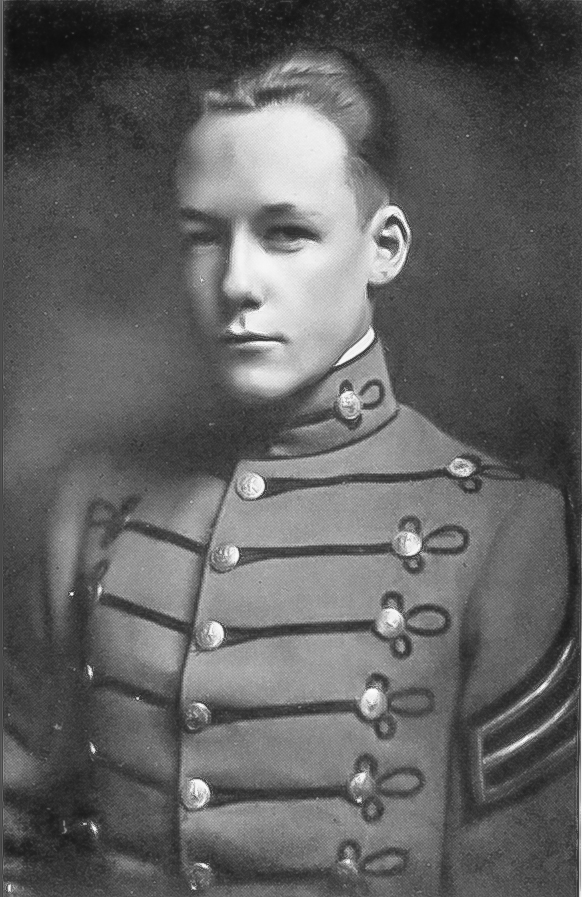 The internship is intended to offer compensation for up to 600 hours per year of services rendered under the direction of the Museum Executive Director. In addition, there will be a stipend for the executive director for administrative and project support.

Having energetic and willing hands to help the Museum Director with the myriad of tasks involved in running a non-profit museum is a very positive development and we are grateful to Mrs. Charleton for honoring her husband in this unique and valuable way."

Article on William Curtis Charleton from the 2014 Winter Bayonet:

He was the bugler in each of the four years he was in the AMA Corps of Cadets. He went on to have a sterling career in business and now, many years later, he is being remembered fondly as a mentor by a long-time business associate.

The cadet was William Charleton, ‘15, and this past year his widow endowed two internships at the AMA Museum. John Botcheller, ‘67, is the nephew of Helen and William Charleton. William passed away in 1988.

John writes: "l received a letter from a retired businessman, Skip Ordeman, who knew my uncle for more than 35 years during their paper industry careers. He sent Nancy and me a letter on the appropriateness of the AMA Museum Internship.  "My uncle 's mentoring passion continued long after he retired from Mead Paper Company (now MeadWestvaco) and he and his wife sponsored three of their nephews to attend AMA: Rich Maschak, ‘71, William Maschak, ‘83, and me. "

As I read the recent article describing William Curtis Charleton’s widow, Helen, funding an intern program at the Augusta Military Academy, l couldn’t help but think how like my old boss, "Kiddo", as he was known, to fund a program that would help young people further their education and experience. l worked in the New York ofﬁce for the Mead Paper Company where William was the manager in the l950’s.

He was the friendliest and most outgoing person you would ever want to meet. He was a great salesman and a mentor to all of his young sales- men. He had no children of his own, which may, in part, account for his interest in each of us and our development.

Kiddo wanted us to be good salesmen, but also to be continually bettering ourselves to be prepared for whatever opportunities might come our way. His sales training was one-on-one, talking with you about your accounts, and giving a mix of account types to broaden our experience, encouraging us to take printing courses and join printer organizations, were all part of his self-improvement program. One of the most helpful things he did for me and the other salesmen was encouraging us to join Toastmasters, an organization that improves your speaking ability and builds self-confidence.  Kiddo explained how he had personally passed up many opportunities to speak which might have furthered his advancement within the company.

"Always make yourself more valuable," he used to say. I’ve always tried to follow his words of advice. They have been tremendously helpful to me throughout my life. I have passed the same message along to my children and grandchildren.

Kiddo was a great mentor!  I’m pleased, but not surprised, to learn his widow has made a generous donation to help continue his mentoring in support of Augusta Military Academy‘s intern program.  I am sure he would be pleased!

The First William Charleton Internships were awarded this past: summer (2013).  Two students from Bridgewater College — Sarah Rico and Jordan Stordahl – were the first interns to take part in the program. They worked under the direction of our Museum Director and they were compensated for their time.

As we move toward having the museum accredited, we need willing hands to help.