The AMA Way DVD has been three years in the making, and judging by the reaction the film received at the 2008 reunion, well worth the wait.

The DVD features everything from old 8mm movies shot in the 40's to heartfelt comments from alumni who graduated from 1935 to the 1970s. It highlights cadet life and salutes those special faculty members we all revere. It depicts how boys were turned into men at Augusta and emphasizes the special bond AMA men feel for the school and each other.

Says Karl Haleamau, '71, "We have a special bond that is not experienced by others. We all left something in Fort Defiance when we left school for good." Julian Quarles, '35, says that in the last formation of his senior year, "18 year old men were crying because we had been so close and we didn't know if we would ever see each other again." Roger Messick, '52, said that by year's end "you knew 90 percent of the first names of all of the cadets in the corps."

Many who saw the DVD at the 2008 Reunion were grateful that the house lights didn't come go up the moment the presentation ended. Doug Pennock, '72, said that, "As an ex-cadet, the film caused an explosion of emotions that awakened old memories of my six year stay at Fort Defiance. I dare say the film had a similar effect on all the former cadets who saw it. Their tears spoke for themselves. At the end of the film, my wife, Trudy, spoke a testament to how well it transmits the sense of belonging and brotherhood that we feel for each other and for this institution. Trudy simply said, 'Now, I understand.'"

You may be interested in knowing that the DVD has been prepared for showing on PBS stations. if you contact your local PBS station, ask them to preview the video, then show it on their channel. 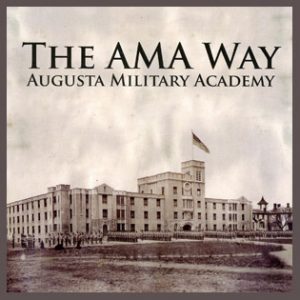 The AMA Way is available at the AMA PX at shop.amaalumni.org
Museum@AMAalumni.org
540-248-3007 FAX 248-4533
Use Visa, Mastercard, American Express or Discover
$20 per DVD at the PX
$25 per DVD by mail
Contact us about quantity discounts.

The following video is six minutes of highlights from the full 27 minute DVD.